Words from the diplomatic front

From Citizen to Diplomat: Part I
Submitted August 30, 2008 by Stephan Helgesen

For those of you who yearn for faraway places and think the foreign service might be your ticket to ride Uncle Sam’s diplomatic train, I have three words of advice ... go for it! 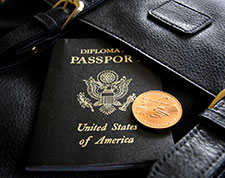 In 1982 I sent in my application and began the 18-month process to get tested and hired. Those 18 months were a story in themselves as I waited for the letter that would accept me. To my great pleasure I was called in to take the Foreign Service Exam. I hadn’t taken an exam since college and wasn’t sure what it would be like, but I made the trip from Connecticut to Washington (my very first time in our nation’s capital!) and waited the weekend in nervousness in my hotel room. The time passed quickly, and on Monday, dozens of us were herded into a large classroom and given the Foreign Service Exam.

A crucial part of the test was the ‘roundtable’ where representatives from government agencies, businesspeople and academicians sat in judgment of your answers to some short questions. I was motioned over to a table and told I would have only a few minutes to answer some questions. I remember one in particular. The head questioner gave me the following ... “You are the Deputy Chief of Mission of the Embassy in a Latin American country; the Ambassador is out of country, and you are now Chargé d’ affairs. The running of the Embassy is in your hands. You have just gotten word from your head of intelligence that he was informed by the host country intelligence service that a group of missionaries have been captured by a guerilla force operating in the mountains. They are holding several people hostage for a ransom of $5 million.” At this point the questioner clicked his stopwatch and said, “Go. You have two minutes to tell us your plan of action.”

I thought for about 30 seconds and asked the following question, “Excuse me. Are the missionaries American citizens? Because if they’re not, I don’t think we have an obligation to negotiate their release. We could, however coordinate with the host country’s intelligence service.” Apparently that was one of the right answers, because heads were nodding and pencils were put to paper. I mention this story not to underscore any extraordinary presence of mind I might have had but because I think a goodly portion of common sense is one of the most important ingredients for success in a foreign service career.

Common sense coupled with a keen sense of responsibility for others is a winning combination, and I tried to remember that all through my time in the service. After the exam, I went back to Connecticut, sure that I did reasonably well, but also sure that the others did much better. They were, after all, people with Masters Degrees and even some PhDs. How could I possibly compete with such credentials?

I convinced myself that I did have a few things in my favor: I had lived and worked overseas for four years back in the 70s and spoke a foreign language. I was sure that would give me points, but enough? The waiting was murder. Three months later, I got a letter saying that I made the cut, and if I was ready to take the next step, I would get a full FBI background check. If that went well, I would be asked to take a complete medical examination, and pending a positive outcome would be offered a job.

The FBI did their job well. I know because I got calls from old school friends who asked me if I was in some sort of trouble! Old neighbors were asked probing questions about my trustworthiness; if I was the type who might take a bribe! I guess I hadn’t made too many enemies, because I got the FBI’s stamp of approval, and on I went to the doctor’s office to get my medical. Everything was set and I accepted the agency’s offer of a position to serve anywhere in the world — “worldwide availability.”

Back to Washington I went, this time for three months. I got language tested and received my first assignment. I was to be a junior Commercial Officer at our Consulate in Rotterdam, The Netherlands.

I then spent the next many weeks in ‘Area Studies’ getting ready for the Dutch and to take my place in the foreign service ‘family.’ Time passed quickly, and soon my 11 year old daughter and I were on our way to Europe. While Europe was not new to me, Holland was. Fortunately, nearly everybody spoke English, so I could make myself understood. We were met at the airport in Amsterdam by my ‘sponsor,’ a very friendly American officer appointed by the Embassy in The Hague to take care of me and a terrific Embassy driver named Friits. Then we were off to temporary quarters in The Hague and spent the rest of the day unpacking and checking out the town.

The following day my daughter and I were driven to the Embassy and were processed in, given ID cards and introduced around the ‘Mission.’ First on my list was my immediate supervisor, Stan Harris, the Commercial Counselor who took me up to meet the Ambassador, L. Paul Bremer III. I remember being extremely impressed by him, but more importantly, he made me feel welcome and at ease. I will always be grateful to him for that. Later, I met his Deputy, Arthur Hughes, the Economic Counselor, Richard Hecklinger, Political Counselor, Michael Habib and Frank Albert, the Head of USIS (Cultural Affairs and the media).

My daughter was registered in the American School of The Hague which was located in the nearby community of Wassenaar (school was to begin almost immediately) and we were then taken to lunch and later driven back to our temporary apartment. An Embassy is like a department store. The principal ‘leaseholder’ is the State Department which operates most of the departments like the Political Section, Economic Section, USIS. STATE also provides all the administrative services, transportation, etc. Security is managed by an officer who works for ‘DS’ Diplomatic Security, but the ones my daughter liked the most were the Marines who made up the Marine Security Detachment at ‘post’! Handsome, young and true specimens of physical fitness, these young men would soon become her friends and protectors. They had names like ‘Ski’, ‘Mock’ and ‘Mike’ and were the finest of the finest. Semper fi to them all wherever they are today!

Like any department store, the Embassy had ‘leased departments’ — other agencies that occupied space there. They ranged from the Drug Enforcement Agency, The Defense Dept. (Office of Defense Cooperation and the Defense services like the Air Force, Navy and Army), The Legal Department (Dept. of Justice), the intelligence agencies and mine, The Commerce Department or Commercial Section. Each had their own workplans and agendas, but all were coordinated with the Chief of Mission, the Ambassador.

During the next few months I commuted from our ‘Heerenhuis,’ a townhouse the Embassy rented for us that lay in the village of ‘Scheveningen’ not more than four miles from the Embassy to my post at the recently remodeled Consulate in Rotterdam on the ‘Coolsingel.’ Its Consul General was a very jovial, friendly career officer named Don Junior. Don knew his job well and helped me understand the workings of the Consulate and Rotterdam (my job was to work with the Dutch business community and build up importer and distributor relationships with the many local businesses there so that we could find outlets for American-made products). Don took his work seriously, but he didn’t take himself too seriously. In fact, one day, he called me into his office. I didn’t know why, but when I arrived he motioned for me to sit down as he took out a large shoebox and proceeded to rifle through it. I sat waiting while he flipped through one index card after the other before raising up his head and said, “Ah, there it is!” Next he said, “I know you’re going to give a speech in Delfzijl (a town in northern Holland), so you had better be prepared.” He pulled out a worn index card and said, “take this with you; it’ll help.”

He handed me the card and on it, scrawled in Don’s inimitable handwriting was a joke! He told me to read it aloud, and after I botched the delivery twice, he said, “No, no, no. Read it this way.“ Don was a master of mirth. In his box was a lifetime’s worth of jokes, all filed by theme. I’m not sure if it was Don who told me the definition of a diplomat (A man who always remembers a woman’s birthday, but never her age), but it was Don who sticks in my mind as my first encounter with an unassuming diplomat, a man who could get you to do what he wanted without you realizing it wasn’t your idea. Sadly, Don passed away many years ago, but I will always remember him, fondly.


Foreign Service Retiree Associations 2008
This is the most recent list of Retired FSO Associations we could find. If any of our readers know of any other associations or would like to correct any of the information, please send to: info@citizendiplomats.com Thank you.